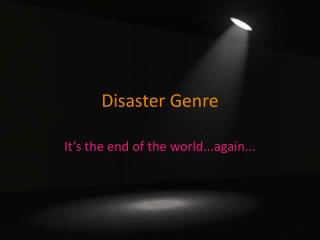 What is a disaster? - . a disaster is a natural or man made event that causes widespread loss of life, property and

The Thriller genre - . the thriller genre is one which is built upon fast paced, frequent action, along with heroes who

Avoiding Spiritual Disaster - . 2 samuel 11-12. avoiding spiritual disaster. but each one is tempted when he is carried

FLIXBOROUGH DISASTER - . the flixborough disaster was an explosion at a chemical plant close to the village of