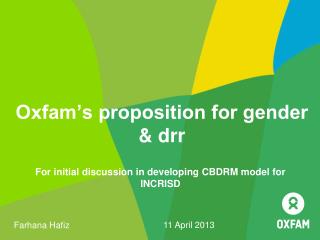 Oxfam Challenge - . 2009. country selection. my country choice. the country i chose papua new guinea , because the are

Oxfam America s Rights-based Approach to Development - Oa's rba understanding. is based on the belief that human beings'

Proposition - . 1. “the bible teaches that if a man puts away his scriptural (faithful) wife for a reason other than

Fundraising for Oxfam - . b uilding lasting solutions to global poverty and injustice. a success story. methods of

Gender &amp; Women’s S tudies - . the year in pictures plus! classes you can take in the fall!. breckinridge bash.

DRR Exercise - . this presentation. outline where the exercise will be based provide background information on the

The Oxfam Trailwalker - . my experience in completing 100km in 48 hours stephen tsui. a team of four, to complete 100km