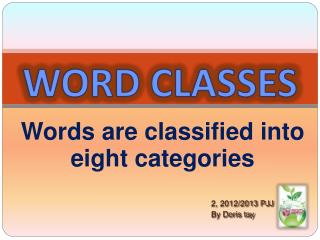 FREE-WORD COMBINATIONS - . definition of a word-group and its basic features structure of word-groups meaning of

Objects and Classes -- - . now that some low-level programming concepts have been established, we can examine objects in

And God said - . he revealeth his secret unto his servants . gods word. is gods word changeable? can it change? if not

Unit 5 Word Formation: Conversion - . conversion conversion is a main type of word-formation assigning the base to a

Chapter 8. Word Classes and Part-of-Speech Tagging - . from: chapter 8 of an introduction to natural language processing,

Chapter 2 - . words and word classes. what’s in this chapter?. please look at the list of topics on page 12. how many