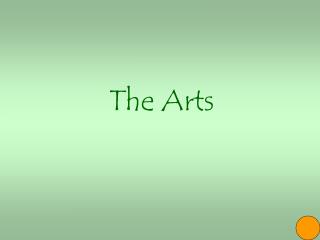 Supporting The Arts - Why Community Theatre Is Important - Why is it important to support the arts in your community?

The Future of the Arts in a Digital Culture, I - . digital media &amp; virtual culture 11/28/07. themes in digital

Connect the arts to the school - . 1. to legitimize, affirm, and show where arts integration lives 2. to show how arts

The Arts, (cinema, music and visual arts) under Stalin - . by ximena aranda. proletkult. focus moved away from ‘high

Perceiving The Arts - . an introduction to the humanities. humanities. what it means to be human humans have the ability

The Arts - . tok. four key questions. what is art? are aesthetic judgments subjective or objective? how do the arts

Evolution of the Arts - . the evolution of music. index. musician timeline describing the musical periods. musical

How the Arts Develop the Brain and Contribute to Learning for ALL Young Children Sandy Putnam-Franklin &amp; Su - Get