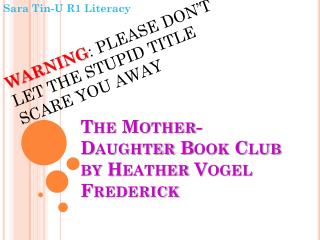 The Mother-Daughter Project - . we all have one thing in common:. our daughters. “no more mean girls”.

mother daughter jewelry - If a touch of daintiness is what you are looking for, this minimalist jewelry piece is the best

MOTHER AND DAUGHTER AT SCHOOL - . it is the biggest p ublic literacy campaign in turkey. it was launched in 2008 with the

Read Mother Daughter Quotes Here - At quotes hunter. every single missed opportunity in my life has been totally worth

Like Mother like daughter dresses 2017 - Simple and rocking matching outfits ideas are awesome, this is the classic

Book Club - . book club community. this is not an independent reading assignment. your community is there to support you.

Book Club - . book club. students will read a novel independently and then come together and discuss their book in