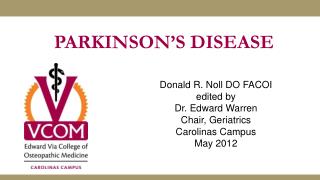 Exploring physiotherapy for Parkinson s disease: A Delphi survey - Background: the need for a clear definition of

On the Road to a Cure for Parkinson s Disease: Are We There Yet - A cure for parkinson's disease: two visions. very early

PARKINSON’S DISEASE - . sarah newport. background . historians have found evidence of the disease as far back as 5000

Parkinson’s Disease: - . comprehending the challenges and the choices. according to the national parkinson foundation,

Why Paraquat is claimed to be associated with Parkinson’s Disease - . parkinson’s disease: association with paraquat.