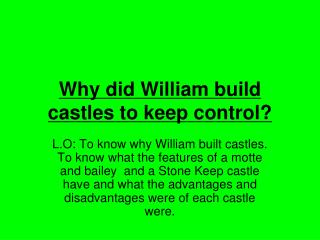 Why did William build castles to keep control? Why did William build castles to keep control?. L.O: To know why William built castles. To know what the features of a motte and bailey and a Stone Keep castle have and what the advantages and disadvantages were of each castle were. Keep. This is where The Lord would stay. Palisade:

Why did William build castles to keep control?

Bridge to Terabithia by Katherine Paterson

Castles - . the keep. the castle’s keep is easy to find. the largest building standing in the heart of the castle. it

The Lord of the Flies - by William Golding - . about william golding. british novelist born on september 19, 1911, died

The Normans - . introduction to the central middle ages.

How did the Domesday Book help William control England? - . l/o – to explain why the domesday book was so important.

Medieval Castles - . purpose. primary purpose was to provide protection of its residence during wars home to kings or