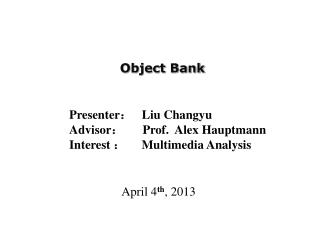 CONCURRENT AUDIT (BANKS) - . concurrent audit is a systematic examination of all financial transactions at a branch on

DGP – Sentence 1 - . sentence parts. sentence / word bank. oh, what have i done to be blessed with such friends? word

INFO 206 Lab Exercise 1 - . introduction to classes and objects. reference. object “an object associates data with the