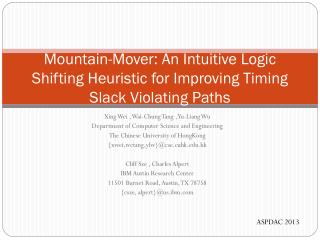 A Plethora of Paths - . eric larson may 18, 2009 seattle university. paths are commonly used in static analysis

Mountain Men - . who were the mountain men?. inspired by the adventures of lewis and clark, thousands of explorers and

Heuristics in Judgment - . the following are examples of heuristics in judgment: anchoring and adjustment availability