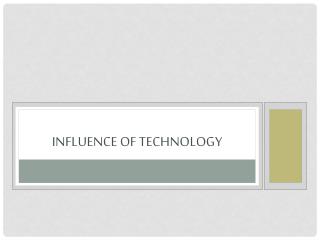 INFLUENCE OF TECHNOLOGY. WHO HAS THE DEEPSET RELATIONSHIP?. KEY POINT!. TECHNOLOGY REMOVES US FROM NATURE! BUILDS A ‘NICE LITTLE WORLD FOR US TO LIVE IN. INCREASES THE DISTANCE BETWEEN US AND THE RESOURCES WE USE. “EVERY TIME WE INVENT SOMETHING NEW, WE FORGET HOW TO DO SOMETHING”.

Technological Impact on Business Environment - Businesses can use technology in order to reduce the operating cost. these Who Am I? The Influence of Teacher Beliefs on Instructional Technology Incorporation - . susan lucas and vivian wright

Technology’s Impact on Business - . why it’s important. knowing how technology has influenced business sheds light on

INFORMATION TECHNOLOGY AND ITS IMPACT ON SCIENCE, CULTURE AND SOCIETY - Lotfi a. zadeh computer science division

A Brief History of Technology - . foundations of technology (a). are you prepared for class?. you will need your folder

Social Impact of Technology - . 12 cafs. reasons for the development of technology. b – b etterment of society i – i

How has the language of this answerphone message been influenced by technology? TASK: - “uh (.) it’s sophie here, um

Iannis Xenakis and his influence on music technology today - . xenakis : an introduction. may 29,1922 – february 4,

How technology influence Malaysia’s Children - . children without technology. children in the past played outdoor and

Technology’s Impact on the Gaps Model of Service Quality