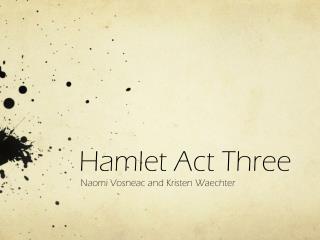 Hamlet Act Three. Naomi Vosneac and Kristen Waechter. Thesis. Our thesis is based through a feminist belief that if Hamlet were a female, the play would have ended completely different The failure of Hamlet’s ability to be straightforward and upright is what dragged on the play. Act Three - . literary devices. opening to the act is incredibly descriptive- miller has specifically said how the