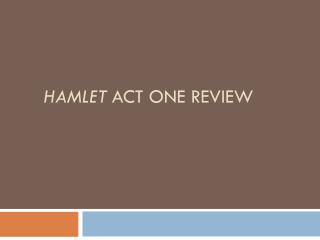 Hamlet Act ONE Review. Act One Questions. Who, What, Why?. 1.What reasons do Laertes and Polonius give for their command to Ophelia to stop seeing Hamlet? List at least ONE REASON for each. Answer: Question 1/ Laertes. Who, What, Why?. “For Hamlet, and the trifling of his favours. Hamlet In Review act 1 - . act 1: scene 1. describe the atmosphere and how it is created in this scene. what reasons are

Act One Review - . what are your first impressions of the major characters so far? use examples and text to influence

Hamlet Review! - . summary. act 1: hamlet is upset that his mother married his uncle after his father’s death. watchmen