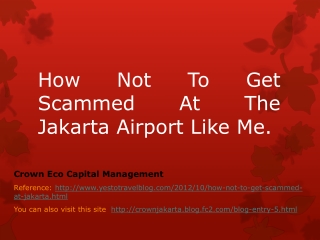 http://www.yestotravelblog.com/2012/10/how-not-to-get-scammed-at-jakarta.html crown management international capital relations blog How Not To Get Scammed At The Jakarta Airport Like Me It’s my second time at the Soekarno-Hatta International airport and I could not fathom my stupidity this time around. You think being in the same place knowing the same story makes one wiser right? Not me! If you have read my post about my first experience at the very same airport you’d know that I was able to handle those infamous touts pretty well. It was barely 3 months since my last trip to Jakarta. I slept at the airport so I know the terminal and the drill. Avoid the touts and wait for the bus. But somehow all those information dissolved in the cigarette smoke filled air of Jakarta. I found myself inside a van heading to Terminal 3 with 200,000 rupiahs gone out of my pocket. It was one of those surreal moments where you are in deep shit trouble at the back of a moving car. Alone. At midnight. Here’s how and why the stupidity happened. There is this one annoying guy I chatted with at the boarding gate of NAIA Terminal 3. I am not easily annoyed but man was he snooty and being too friendly. At first he was being helpful, telling me about the good places to see in Java, how he’s been there 4 times already and yada yada yada. But then he’s gone personal and tried to be too close for comfort. Asking about my life, getting my number and shit. Did I mention he was old and big bellied? I don’t have anything against old and big bellied people, my father is both. But this guy was hitting on me and he was not the least bit shy about it. As soon as the gates opened, I picked up my hand carry and bid him goodbye. I was very relieved to finally get away from him. I had an isle seat and was next to two lovely ladies who were a delight to talk to. My relief crushed when the empty seat in front me was occupied by the very same guy I wanted to never see again. Ever. Oh well, atleast he How not to park at the airport? - Avoid the common mistakes while parking at the

The Student Is Not Like Me - A prophesy. intelligent tutoring systems will be the textbooks of the future.. itss are the

How To Get People To Like local electrician near me. - Be positive to work with a licensed and insured electrician to

How to Get People to Like Melbourne Airport Short Term Parking? - If youu2019re looking for melbourne airport short term

How To Avoid Holdups At The Istanbul Airport - We are providing reliableu00a0chauffeur driven istanbulu00a0cars. we

Don't Get Scammed when Transferring Money to India - There are many people who still fall prey to money transfer scams.

How to Get To Stansted Airport by Taxi - Ak cars london offer cheap instant quotes, fare comparison and online taxi

How to Get at Lotofácil - The fruit of the great operate has achieved a degree in popular: a worksheet that actually

How To Get People To Like https://promotionhealthcare.com. - In order to be a profitable naturopathic doctor, students

How to get a guy to like you - . trust me, don't be yourself. - victoria pesce -. step 1. guys only like pretty girls and

How to get people to like Mens jockstraps? - Men do not like to spend much time on getting to know about the variant of