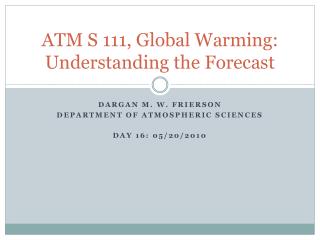 ATM S 111, Global Warming: Understanding the Forecast. Dargan M. W. Frierson Department of Atmospheric Sciences Day 16: 05/20/2010. Next Topic: The Debate. Why is everyone so upset/confused/misinformed about global warming? 2007 poll from Yale University on detection of global warming: Global Warming - . by. julia schofield. introduction. which of the following things support global warming: a) winters

THE FORECAST IMPACTS OF GLOBAL WARMING - . what could we be facing in the years ahead? how will the arctic and africa be

Global Warming - . so what? . april 2014 . pay ranchers and farmers to move. carbon neutral is no longer enough. carbon

Global Warming - . so what? . december 2013 . climate changes without humans . climate has been changing for hundreds of