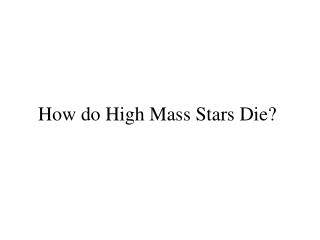 How do High Mass Stars Die?. Class Announcements. Homework is due today. Email to me the title of your choice of class project TODAY. Friday there is a class midterm test and a homework due. NEW HOME WORK How to pray (at) Mass? - . a look at the spiritual significance of the mass. introduction. you must have attended mass