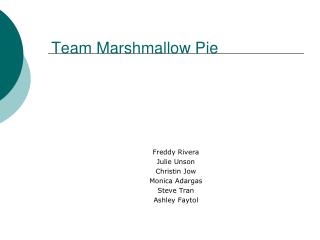 team building (modern) powerpoint presentation content: 134 - In a team-oriented environment, you contribute to the

The Marshmallow Challenge - Who can make the tallest free standing structure in 22 minutes?. the marshmallow challenge.

Designed by Jennifer Yong teaching@jenniferyong - .com please send her your thanks if you appreciate this!. 200,000 from