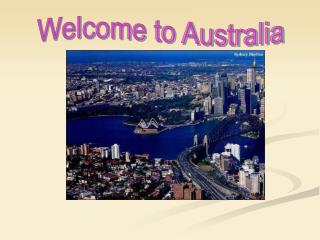 Welcome to Australia. Australia is situated south of Asia, between the Pacific and the Indian Oceans. Australia is a continent, a country and an island at the same time. Australia is located in the southern hemisphere. Some facts. OFFITIAL NAME : Commonwealth of Australia CAPITAL: Canberra Welcome to Australia! - . final destination. you have landed on uluru, also known as ayers rock. uluru is a large

WELCOME TO CQUniversity Australia - . your student account. summary. what happens and when what you need to know about

Welcome to Bi-Tron Australia - . we are here today to present to you an overview of product range that is a proven

Welcome to PSI Water Filters Australia - We buy water treatment systems in bulk, so we can offer you significant price

Welcome To Australia Largest Sex Products Online Store - Sex is an incredible experience for everyone involved. it

Welcome to Whimsical Wanda Australia Clothing Brand-2020 - Whimsical wanda is about fun, colourful clothes that are

Animals of Australia - By: mackenzie joos. animals of australia . platypus. platypuses are covered with three layers of