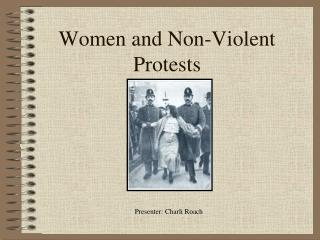 Women and Non-Violent Protests. Presenter: Charli Roach. Overview. The participation of women in non-violent resistance and protest is not geographically or chronologically distinct, and as such examples can be found in a variety of localities and eras.

The Fight Continues - . maccarthy. essential questions. how did non-violent protests play a role in the civil rights

How did protests against the Vietnam War develop? - . lesson objectives. to identify the different ways that people

1916 RISING - . friday by ciara and claire. the morning. at the gpo, pearse ordered the cumann na mban women out of the