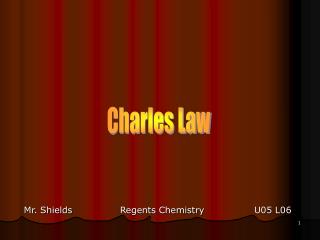 CHARLES’ LAW - . a gas in a closed system at a constant pressure, the temperature and the volume are directly

Charles’ Law - . at constant pressure, the volume of a gas varies directly with its kelvin temperature equations: v 1

Charles Law - . charles’s law. jacques charles determined the relationship between temperature and volume of a gas. he

Boyle’s Law and Charles’ Law - . what are these laws all about?. these laws define the behavior of gases. pressure.

Charles Abbott - Attorney at Law - Charles lincoln abbott iii has worked with multiple firms. he worked as a campaign

Charles - . best. laura vroom. childhood. he was born on feb. 27, 1899 in west pembroke, maine. his parents were canadian

“Charles” - . by shirley jackson. plot plot is the sequence of related events in a story. there are five parts:

“Charles” - . by shirley jackson characterization and point of view. warm-up. think about what kindergarten was like