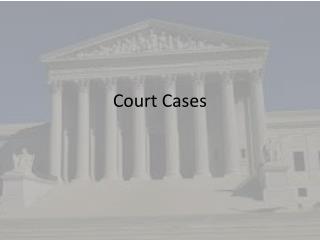 Court Cases. Marbury v. Madison (1803). Marbury tried to force Madison to give him appointment as judge Established Judicial Review (the Supreme Court claimed its right to declare acts of the Legislative and Executive Branches unconstitutional) Allowed other cases to reach the Supreme Court. Court Cases - . marbury v. madison. the supreme court of the united states has the power to review acts of other branches

Court Cases - . by: grace jenkins. desegregation. brown vs. boe (1954) court struck down on “separate but equal”

COURT CASES - . criminal cases can be broken into 3 groups 1. infractions 2. misdemeanors 3. felonies. there are two

SUPREME COURT CASES - . the supreme court held that anyone accused of a felony, where imprisonment may be imposed, has a

Supreme Court Cases - Must know. should know. good to know. supreme court cases. landmark decisions to know for the ap

Supreme Court Cases - . supreme court project. directions:. students should listen to the categories that these cases

SUPREME COURT CASES - . marbury v. madison (1803). jefferson ordered that the papers not be delivered and gave the job to