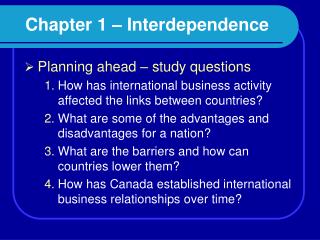 Chapter 1 – Interdependence. Planning ahead – study questions How has international business activity affected the links between countries? What are some of the advantages and disadvantages for a nation? What are the barriers and how can countries lower them?

Ch 3: Interdependence and Gains from Trade - . intro: --satisfy your wants by: self sufficiency or specialize and trade

1.2 Interdependence - . all species rely on many others for survival symbiosis – the relationship between individuals

Interdependence and Trade - . economics studies how society produces and distributes goods and services so that wants and

Group Interaction Activity - In order to be classified as a group, a collection of people must demonstrate

Interdependence and Symbiosis - . 1.2    interdependence. could you carry out your day without depending on other

The Main Idea – Chapter 7 - . this chapter discusses how business is conducted internationally. 7.1 discusses the

Diplomacy and Global GovernANCE Service in an Age of Worldwide Interdependence - Are foreign services obsolete? a

Globalization and Its Discontents - . ir theories on the eu. liberalism institutions domestic politics and

Big Idea 17: Interdependence - . description a. plants and animals, including humans, interact with and depend upon each

Unit 6A: Interdependence and adaptation - . why do you think one of the plants is healthy and one is not?. do you think