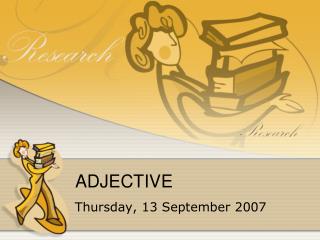 ADJECTIVE. Thursday, 13 September 2007. Overview. It modifies a noun/pronoun by describing, identifying, or quantifying words. It precedes the noun/ pronoun Some nouns, pronouns, participles phrases can be acted as adjective What does an adjective do in our language? - . describes a noun or pronoun. 2. what are the 3 adjective test

A Royal Mystery - . by audrey carangelo. discomfort. noun-distress or unease gavin felt a great deal of discomfort after

VOCABULARY TO LEARN - . unit 2 level 3. absolute. (adjective) complete, perfect, outright, without limit, he is an

Comparative and Superlative Adjectives and Adverbs - . adjectives and adverbs are words the modify other words. the

Second Semester Review - . be careful, if you get the wrong answer, you will have to start back over from the very

CHAPTER 21 PHRASES and CLAUSES - Objectives for the day: to recognize prepositional phrases in sentences and distinguish