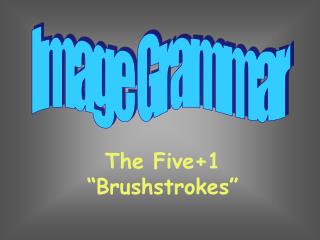 Image Grammar. The Five+1 “ Brushstrokes ”. Compare the following images, the first written by a high school student…. It was winter. Everything was frozen and white. Snow had fallen from the sky for days. The weather was horrible. The second by well-known novelist Brian Jacques….

Introducing the Five Brushstrokes - . adapted from harry noden’s image grammar. about me and my classroom. 9 th and 10

Brushstrokes - . when writing, much like in art, a writer must use two different types of perception: the visual eye and