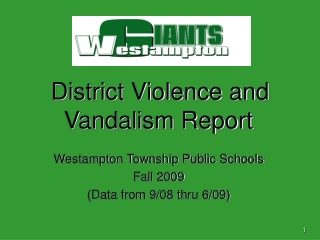 District Violence and Vandalism Report. Westampton Township Public Schools Fall 2009 (Data from 9/08 thru 6/09). This report includes the following: A comparison of the EVVRS statistics from the previous year. A review of suspension totals for 2008-09