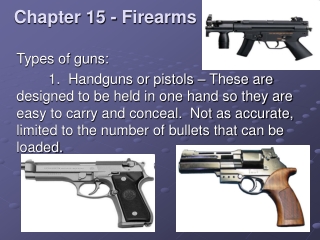 Chapter 15 - Firearms. Types of guns: 1. Handguns or pistols – These are designed to be held in one hand so they are easy to carry and conceal. Not as accurate, limited to the number of bullets that can be loaded. Types of hanguns. Firearms - By: stephen bush. firearms . cannons. cannons date back as early as the b.c years. cannons weighed around

FIREARMS - . firearms. introduction: many types of guns used for a variety of reasons. safety concerns always