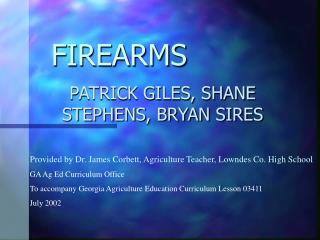 Wall Racks for Firearms - If you need to store a lot of guns in a small area, or you are just looking for a beautiful way

Firearms, Took Marks &amp; Other Impressions - . firearms: a quick history. almost every gun is based on the same

Firearms Identification - . forensic firearms examinations. identification of a bullet, cartridge case, or other

Ballistics &amp; Firearms - . ballistics: how bullets behave after being fired from a gun *study of a projectile in

Firearms (and a little Ballistics) - . once upon a time... more than 1000 years ago…. the chinese discovered black

Firearms and Ballistics - . history of firearms. mankind has been fascinated by the idea of launching a projectile at

Firearms, Tool Marks, and Other Impressions - . objectives: describe techniques for rifling a barrel. list the class and