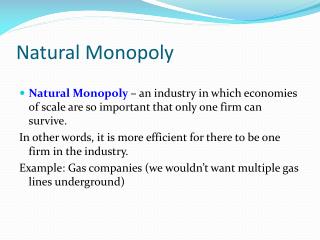 Natural Monopoly. Natural Monopoly – an industry in which economies of scale are so important that only one firm can survive. In other words, it is more efficient for there to be one firm in the industry. Example: Gas companies (we wouldn’t want multiple gas lines underground). THE THEORY OF NATURAL MONOPOLY - . finding and. auctioning of monopoly

Monopoly Structure: Monopoly - . market power is the ability to alter the price of a good or service. a monopoly is one

Theory of Natural Monopoly and Its Control - . i. what is natural monopoly? ii. the pricing problem: rate levels

Monopoly - . monopoly. is a situation in which there is a single seller of a product for which there are no good

Monopoly - . chapter 9. © 2003 south-western/thomson learning. barriers to entry. a monopoly is the sole supplier of a

Monopoly - Structure. the essence of market power is the ability to alter the price of a product.. monopoly structure .

Monopoly - . some basic observations. what is a

Monopoly - . © 2012 cengage learning. all rights reserved. may not be copied, scanned, or duplicated, in whole or in