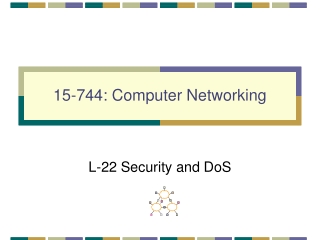 Computer networking - In this section of notes you will learn the rudiments of networking, the components of a network

Networking - . igcse ict mrs. ghazaal. networking. every time we connect to the internet from our pc, laptop, tablet, or

Computer Science Overview Chap4-Networking and the Internet (2) - . jainshing wu. networking topology. the layout of the

CMPT 471 Networking II - . firewalls. security. when is a computer secure when the data and software on the computer are

CS 453 - . computer networking data and computer communications. networking standards. so why can all of these devices

The Basics of Computer Networking - . david phenix computing in the modern world 1 st period. the computer