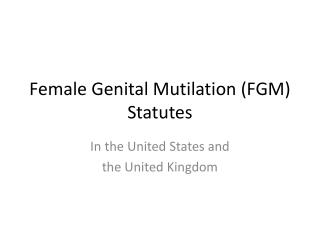 Female Genital Mutilation (FGM) Statutes. In the United States and the United Kingdom. Federal Statutes. Female genital mutilation (18 USCS § 116) Makes it a crime to knowingly perform FGM on a girl younger than 18 in the U.S. Maximum sentence: up to 5 years imprisonment and/or a fine

Child Protection - Level 2. 2014. child protection. for health staff who have any contact with children, young people and

Female Circumcision - . an issue of relevance for students in the us?. female circumcision; female genital mutilation: