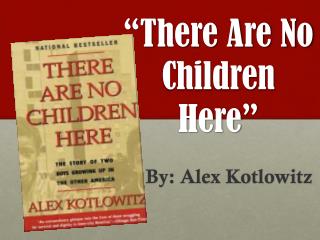 “There Are No Children Here”. By: Alex Kotlowitz. About the Author. Alex Kotlowitz Grew up in NYC His father, Robert is an author of four novels and a memoir Children in the Middle - . protecting your children during and after divorce. divorce trends this century. rate of

Children and Parents - . why have children? the parental role transition to parenthood what children need socialization

Parents &amp; Children - . emancipation. children are given freedom from the legal control and custody of their

Children of God - . our truth god’s truth living in the truth. children of god. true or false? can we trust our eyes?.

Feed the Children - . by: rhianne ammann. the goal of feed the children. they deliver food, medicine, clothing, and other

Advertising to Children - . i mpossible to ignore &amp; avoid holzworth and woodruff. advertising to children.

Marriage and Children - . “he lifted his eyes and saw the women and the children, and said, ‘who are these with

CHILDREN IN NATURE - . jim byford. people and land. a disconnect. “last child in the woods”. by richard louv.

V.I.P`s, can you help the children? - . many romanian s tars have started to follow the example of hollywood stars, to

Children and Advertising - . do children understand the purpose of advertising?. background. advertisements that target