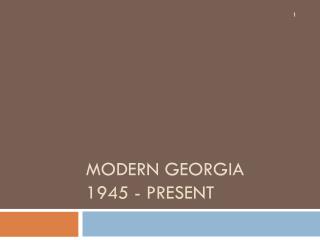 PHILIPPINE ART IN THE MODERN ERA - . modern art in the philippines. it has evolved into wide variety of expressions and

Georgia’s Prehistoric Past - . use your book to define these vocabulary words. a rchaeologist prehistory artifact

Tracing Australian music (1945- the present) - . learning intentions. aims: to explore how the development of popular

Civil Rights Movement in Georgia 1940s-1950s - . ss8h11: the student will evaluate the role of georgia in the modern