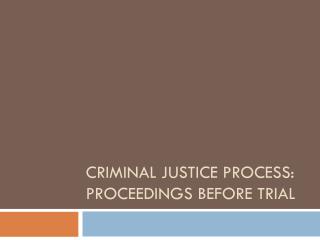 Criminal Justice Process: Proceedings Before Trial. Bail and Pretrial Release. Bail- assure the court that the defendant will show up for trial Bail Bonds http:// www.youtube.com/watch?v=fmdl5ZocbK0

The Criminal Trial Process - . a criminal trial. … is an adversarial process that pits the crown against the accused.

Chapter 10 The Criminal Trial - . adversary proceedings. the trial in the usa, based on common law principles, is an

Criminal Cases, Civil Cases, and Juvenile Justice - . what are the steps of a trial, and how are the rights of citizens

Chapter 14 - . criminal justice process: the trial . right to trial by jury . 6 th amendment: guarantees the right to a

THE CRIMINAL TRIAL PROCESS - . the criminal trial is an adversarial process (when 2 or more opposing sides present their

LAW I: CRIMINAL LAW - . trial procedures. steps in a criminal jury trial. introduction. a criminal trial is the