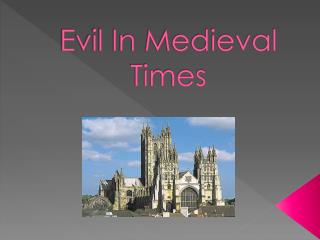 Evil In Medieval Times. Evil In the Government/Castle. The Reeve The Manciple. The Reeve. Physical Description “The Reeve was old and choleric and thin” “His beard was shaven closely to his skin”

Early Middle Ages - . chapter 9 medieval europe. eurasia. europe is a continent that is part of eurasia eurasia is the

The Medieval Period or The Middle Ages 1066-1485 - . the role of the church. a. physical protection. offered safe haven

European Literature during the Middle Ages - . the hero with a thousand faces (joseph campbell) “ . . . the hero’s

The Church in Medieval Life - . 7 th grade ss mms mr. roe. review. previously, you learned about the rise of feudalism in

MEDIEVAL THEATRE IN EUROPE - . introduction. timeframe: from the fall of the western roman empire to the beginning of

MEDIEVAL PERIOD (1100 – 1500) - . transitional period between the anglo-saxon and renaissance period (the classical and