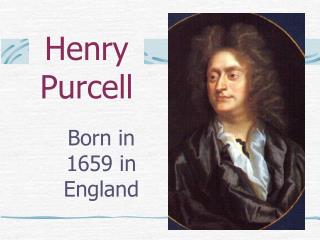 Henry Purcell. Born in 1659 in England. Henry’s Childhood. Purcell. Purcell is generally considered to have been the greatest English composer since William Byrd. Fortunately for Henry, Byrd had been dead for several years when Purcell was born, so the two of them didn’t have a showdown. Reports and Recommendations Dr. Purcell - . economic changes the changing economy the louisiana situation what we get if

Type I errors Purcell model - . if m and t are correlated (eg via a), and m is correlated between twins as well, then the

By: Kaitlyn Purcell &amp; Ashlee Haider - . lived with a widow. didn’t have a mother and didn’t know where his

Henry Hudson - By: sam everhart. henry hudson. table of contents. who is henry hudson where did he explore interview with