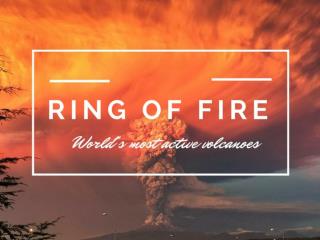 Scenes from the Ring of Fire, an area in the Pacific Ocean basin where a
large number of earthquakes and volcanic eruptions occur. Volcanoes - . ch 8. bill nye volcano video. what is a volcano?. a volcano is a weak spot in the crust where molten

Around the Ring of Fire - . locating plate boundaries of the pacific rim. pacific northwest seismic data. this is a map

Tsunamis - . by: taylor murphy &amp; merry nestor. how do tsunamis occur ?. when a tsunami leaves the deep ocean it

Where do earthquakes occur? - . plate tectonics. the ring of fire. earthquakes. what instrument do we use to measure

Volcanoes &amp; Rocks - . volcanoes. volcanoes are formed when molten rock, or magma, from the earth’s mantle,

Volcanoes and Earthquakes - . aims: to discover why there are no big earthquakes and volcanoes in toulouse to find out

Chapter 6 – 1 Volcanoes and Plate Tectonics - . what is a volcano?. a volcano is a weak spot in the earth’s crust

Volcanoes - . erupting with fun!. magma vs. lava. magma is liquid rock produced under the earth’s surface but magma

Theory of Plate Tectonics… - . plate tectonics refers to the movements of plates (large segments of continents and

Volcanoes and Plate Tectonics - . ring of fire. what is a volcano?. a weak spot in the crust where molten material, or

Map Projections and the RING OF FIRE - . what is a projection?. it is difficult to translate a spherical globe onto a

Earthquakes and Volcanoes - . key ideas. where do most earthquakes occur? how do scientists learn about earthquakes? what

The Fire Triangle - . in order to understand how fire extinguishers work,. you first need to know a little bit about