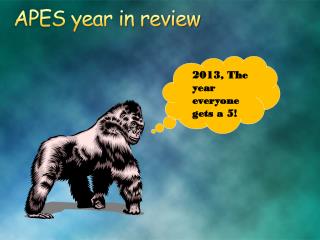 APES year in review. 2013, The year everyone gets a 5!. Easter Island. Sustainability - A system/process can continue indefinitely without depleting resources used. *no sacrifice to future generations* Stewardship Caring for something that does not belong to you Sound Science

AP ENVIRONMENTAL SCIENCE - APES - . environmental science is the study of how the earth works, how we interact with and

Monkeys and Apes Endangered? - . how can you help?. who’s endangered?. global warming puts just about every one of the Creating an “A” APES Project - . the presentation…. hints for a successful presentation. plan carefully do your

APES year in review - . 2014 , the year everyone gets a 5!. introduction. understand how natural world works understand