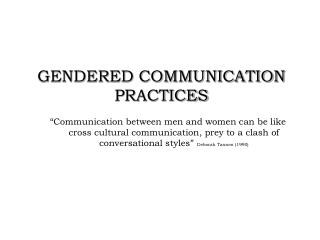 GENDERED COMMUNICATION PRACTICES. “Communication between men and women can be like cross cultural communication, prey to a clash of conversational styles” Deborah Tannen (1990). Caveats. “Gender” and “Sex” are not the same. Gender is not a yes/no question. Issues of the “margins” .

Safe Practices - Objective 1 bio/ipc(1): the student, for at least 40% of the instructional time, conducts field and

Communication disorders in young children - . what is communication ?. exchange of information with others. understand.