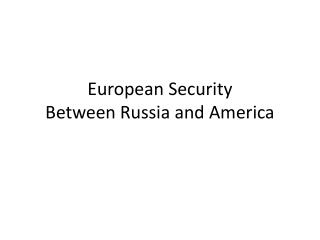 European Security Between Russia and America European Security Between Russia and America. Basic questions about European security. Framing the problem. Definition of security. D egree of protection against danger, damage, loss, and crime. Structures and processes improving security as a condition. .

European Security Between Russia and America

RUSSIA AND THE REPUBLICS - . physical geography of russia and the republics. chernozem : (black earth) world’s most

SS6H1: The Student will describe the impact of European contact on Latin America - . a. describe the encounter and