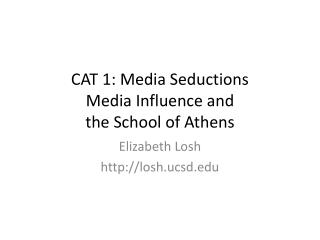 CAT 1: Media Seductions Media Influence and the School of Athens CAT 1: Media Seductions Media Influence and the School of Athens

Year 9 Persuasive Media - . what is media?. can you write your own definition of media? don’t forget to include a

Media Planning and Strategy - How do i effectively use mass media to deliver my message? media planning purpose: to