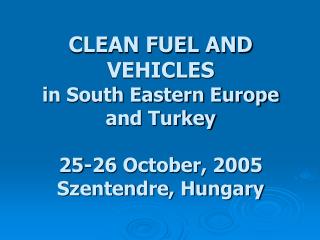 Greenest Of Green Add-on For All Fuel Burning Vehicles, SAFE - (1888pressrelease) the greenest of green products using an

Automotive Industry in Hungary - . main topics covered. about the automotive business in central- and eastern europe

Human Trafficking in South Eastern Europe - . beyond crime control, an agenda for social inclusion and development

Turkey - . where is turkey?. southeastern europe and southwestern asia (that portion of turkey west of the bosporus is

Hungary - . hungary is a landlocked country in central europe. it is situated in the carpathian basin and is bordered by

HOW DID THE USSR ESTABLISH CONTROL OVER EASTERN EUROPE? - . percentages agreement 1944. rumania: ussr 90%. the others 10%

Stability Pact for South Eastern Europe Round Table on Regional Cooperation in SEE - . investment opportunities in the

DIESEL RETROFITS FOR HEAVY-DUTY VEHICLES - . roundtable on clean fuels and vehicles in turkey may 4, 2006 katherine

Alternative Fuel For Vehicles *Hybrid Vehicles* - . by g.rakesh kumar. introduction. hybrid cars have been around for