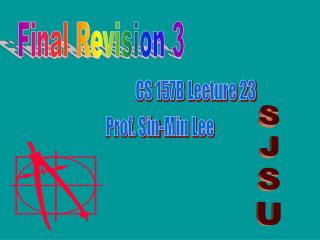 Final Revision 3. CS 157B Lecture 23. Prof. Sin-Min Lee. Modeling. A database can be modeled as: a collection of entities, relationship among entities. An entity is an object that exists and is distinguishable from other objects. Example: specific person, company, event, plant

18. Juni 2010 Lecture at the BOKU for Biosafety Class of Prof. Dr. Margit Laimer - Regulation of gm crops and the

The Relational Model 1 - Cs 157 a lecture 6 . the relational model 1. prof. sin-min lee department of mathematics and

Ch. 8 – Security - . this presentation was originally created by prof. rick graziani. few modifications were made by