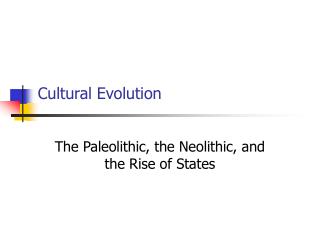 EVOLUTION - . lynn english high school biology ms. mezzetti. the idea of evolution. evolution is the process of change in

Introduction to Archaeology - . the beginnings of scientific archaeology… theories and more. so what is archaeology?.

Genetic Evolution vs. Cultural Evolution - . christopher lynch. introduction. since the time of civilization, amongst

What is Anthropology? - . what is culture?. for anthropologists and other behavioral scientists, culture is the full

The Evidence for Evolution - . chapter 21. evidence of natural selection. darwin collected a closely related group of 14