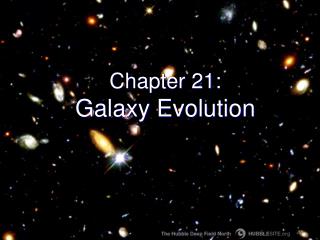 Chapter 21: Galaxy Evolution …is the study of how galaxies form and how they change over time. As was the case with stars… we can not observe an individual galaxy evolve but we can observe different galaxies at various stages of their life cycles

Unit 9 Chapter 13: The Theory of Evolution - . section 1. charles darwin and the theory of natural selection. darwin’s

The Milky Way Galaxy - . chapter 12:. the milky way (galaxy). almost everything we see in the night sky belongs to the