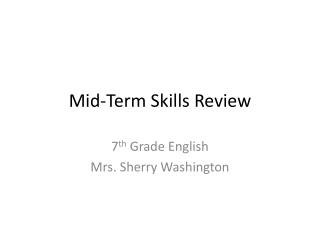 Mid-Term Skills Review. 7 th Grade English Mrs. Sherry Washington. Colons. Use a colon between the hour and minute. Example- 8:30 A.M. Use a colon after the salutation of a business letter. Example- Dear Sir or Madam: Example- To Whom It May Concern:

Basic Math Skills Review - . percents. percent. percent (from per centum ) means per hundred or divide by one hundred.

Mid Year Examination Review - . â€œa powerless child struggling against the worldâ€ how is this comment helpful