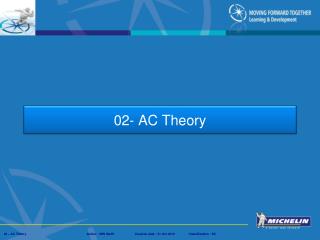 02- AC Theory. The intent of this presentation is to present enough information to provide the reader with a fundamental knowledge of Alternating Current and to better understand basic Michelin system and equipment operations. Module 3: Alternating Current. Electromagnetism

Theory testing - . part of what differentiates science from non-science is the process of theory testing. when a theory