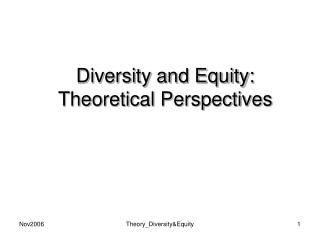 Diversity and Equity: Theoretical Perspectives. The Identity Argument. The basic claim of the identity argument is that race, ethnicity, and culture are central to decision making (moral, political, social)

An Equity Literacy Workshop for Educators - . by paul c. gorski october 21, 2014. i. introduction: who we are. who is in

Gender and Diversity in the Workplace - . aeco 380 dr. jennifer vangilder. how can you find…or avoid me??. where am i?

Equity Crowdfunding in UK : CrowdInvest - This presentation is made by team crowdinvest, presenting the facts about