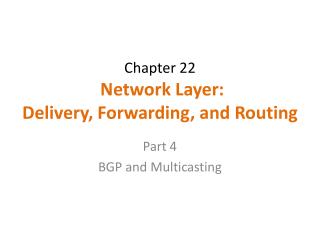 Routing Protocols and Forwarding - . the ip protocol routing protocols intra-domain (inside an as) inter-domain (between

Network Layer Delivery Forwarding and Routing - . delivery. the network layer supervises the handling of the packets by

Routing - . so how does the network layer do its business?. forwarding. the actual “routing” part of routing is