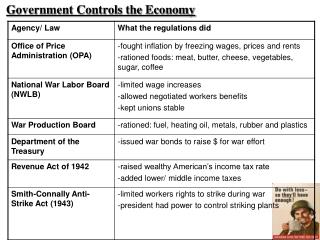 Government Controls the Economy. Rationing. Rationing : Consumers were only allowed to purchase a fixed amount of particular goods. The OPA issues rationing coupons; Consumers faced shortages as a result of the war; Ex. gas, sugar, butter, meat No new cars were produced after 1942. :.

Unit 6: Market Failures and the Role of the Government - . 1. what is the free market? (capitalism). 2. 5 characteristics

Basic pharmaco-economy Is it needed at all? - . do we agree?. naturally yes, but. health above all. it may sound strange,

Business, Government, and the World Economy - . introduction. economic quiz. what is the current us unemployment rate?

Business, Government, and the World Economy - Investment and saving aggregate demand the amount that consumers, business