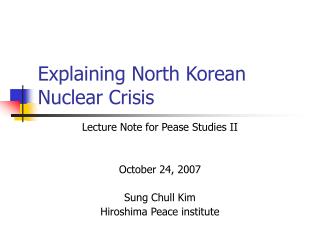 Explaining North Korean Nuclear Crisis. Lecture Note for Pease Studies II October 24, 2007 Sung Chull Kim Hiroshima Peace institute. Preliminary questions. What is the nature of North Korean problem, that is, the nuclear weapons development? And how is the process for a solution going on? Nuclear Chemistry - . nuclear medicine. nuclear radiation can be used to visualize or test structures in your body to see