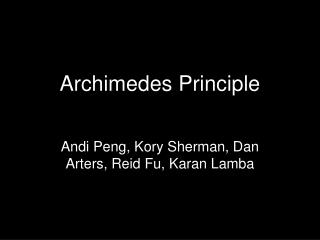 Reflection and Refraction - . reflection. most objects we see reflect light rather than emit their own light. a. b.

FITT Principle - . f requency. how often you do exercise? how often should you be exercising? -guidelines:

10-7 Buoyancy and Archimedes’ Principle - . this principle also works in the air; this is why hot-air and helium